"It was interesting, eye-opening and humbling, all at the same time." So said Bill Wright WB6CMD (at left) upon returning home from the 18th World Championships of Amateur Radio Direction Finding (ARDF).  This was Bill's first time to compete at an international ARDF event, and he hopes it won't be his last.

"I learned a lot, and in some ways it was trial by fire," he continued.  "I don't know how you can fully prepare locally for something like that, because it's on a whole different level.  These are the best in the world and I've only been doing it for nine months."

ARDF World Championships take place every even-numbered year.  Hosting in 2016 was the Bulgarian Federation of Radio Amateurs.  Over 400 on-foot transmitter hunting experts from 39 nations converged on Albena, a popular resort city on the Black Sea coast, for competitions and cultural events.

USA began sending a team to the World Championships in 1998.  The last time Bulgaria hosted was 2006 and that was the year that ARDF Team USA medaled for the first time.  It was a great start, because our team has been on the medal podium every time since.  This year, the American flag was displayed seven times.

USA's team consisted of nine men and six women, ages 26 through 74.  They came from eight states and were selected from the best performers at the 2016 USA Championships in Texas and the 2015 USA Championships in Colorado.  In accordance with rules of the International Amateur Radio Union (IARU), competitors are divided into six age categories for men and five for women.  Those in the prime age category (21 through 49 for men and 21 through 34 for women) must seek all transmitters in each event.  Those in other categories seek all or fewer transmitters, as determined by the organizers and published just before each event starts.

It Started on 80m

The first ARDF championships had only one event, with five CW transmitters on the bottom end of 80 meters.  This event is now called the 80-meter classic.  Competitors must carefully listen and get bearings on each transmitter, because when one turns off, it won't come on again for four minutes.  After a few years, a second classic event on the two meter band was added, with MCW on AM carriers.  In recent years, the sprint and foxoring events were tried.  Everyone liked them, so they were added to the regular championship lineup.  Both of these events are on 80-meter CW.

Each nation may send a maximum of three competitors in each age/gender category to the World Championships.  There are medals for the three best individuals in each category for each of the four events as well as medals for the three best national teams in each category for each event.  Team scores for each category are based on an aggregate of the individual scores of the team members.  There is no collaboration allowed among competitors -- everyone must hunt transmitters independently.  Transceivers and cell phones are forbidden on the courses, as are tablet computers and GPS devices with readable screens.

A World Cup for Training

In the last decade, World Championship organizers began offering extra ARDF sessions called "training camps" just before the championships.  These informal events gave participants some needed practice as well as familiarity with the terrain of the host country.  When Serbia hosted in 2012, the training sessions were replaced by the ARDF World Cup, a series of formal events for individuals with medals for the best in each category.  There was no limit to the number of individuals that a nation could send to the World Cup events.

Bulgaria offered the ARDF World Cup again in 2016.  It was well attended, with China sending almost a hundred persons, mostly youth of middle and high school age.  Eight of the fifteen ARDF Team USA members went to Bulgaria early to participate in the World Cup.

The first World Cup event was an 80-meter classic run on August 30 with a time limit of two hours and ten minutes.  The typical winning time in M40 category for this event is about 55 minutes.  Alexander Sheynis of Russia did it in 54:31, followed about five minutes later by Remigijus Masilionis of Lithuania.  Right behind him at 1:02:43 was Vadim Afonkin KB1RLI, securing a bronze medal for USA.  Other Team USA members in the top ten of their categories were Alla Mezhevaya, placing sixth in W35, Ruth Bromer WB4QZG taking fifth in W60 and Nicolai Mejevoi getting eighth in M50.  Team USA was off to a great start. 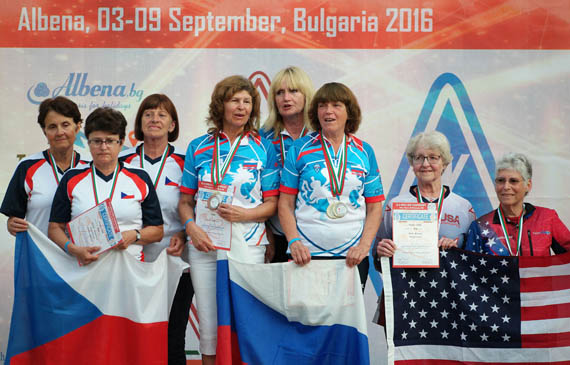 Karla Leach, KC7BLA and Ruth Bromer, WB4QZG (at right, behind USA's flag) had the third best combined scores in W60 category in the 80-meter classic competition on the last day of the World Championships.  Ruth also won individual bronze medals in the sprint and foxoring events of the ARDF World Cup.  (Photo by Lee Namkyu, HL1DK)

The next day was another classic event, this time on two meters.  Alla completed the course in 1:18:53, about a minute behind Steliana Mateeva of Bulgaria, earning Alla a silver in W35.  Another day, another medal.  Also KB1RLI was fourth in M40 and WB4QZG was sixth in W60.

After an overnight rest, it was time for the sprint event, which takes place on a much smaller course than the classic.  KB1RLI was the sprint gold medal winner in M40 category, finding all ten transmitters with an amazing time of 21:09.  WB4QZG was third in W60 to win a bronze medal.  Alla Mezhevaya was fourth in W35.

The last World Cup event was foxoring, a combination of classic orienteering and ARDF.  USA won another medal in this event, as WB4QZG was third in W60 category with a time of 1:11:37.  Also Alla Mezhevaya had a sixth-place finish in W35.  They and everyone else took a well-deserved day of rest on September 3 as the remainder of the World Championship competitors arrived.

The order of events in the World Championships was the reverse of the World Cup sequence, with foxoring as the first event on September 4.  On that day, USA didn't have any medal winners, but WB4QZG and KB1RLI each placed eighth in their respective categories.

Next day was the sprint event, with a feature to make it extra difficult.  According to Ken Harker WM5R, "The marked corridor that you had to follow to get to the finish line was about 120 meters long and half of it was a steep hill to climb.  All of that hillside was sand, making it nearly impossible to get traction to run." Two of our team members finished in the top ten that day, with WB4QZG eighth in her category and Harley Leach KI7XF tenth in his.

Next came the first classic event of the World Championships.  On each of the two classic days, there were ten transmitters on the course, five on two meters and five on 80 meters.  Half of the competitor classes hunted on one band and half on the other.  In ninth place on two meters, WB4QZG was USA's only USA top ten finisher this day,

After that was a day devoted to rest and recuperation, with buses available to take participants shopping or to cultural sites.  With everyone refreshed and well fed, following day brought the last classic race.  Everyone hunted on the band that they had not hunted two days before.  That was followed by the last medal ceremony, with three Team USA members making it to the podium.  KB1RLI won another individual bronze medal for his 1:11:52 course time on two meters.  The combined scores of WB4QZG and Karla Leach KC7BLA earned them a team bronze medal.  Also on that day, Alla Mezhevaya had a sixth place finish.

Vadim Afonkin, KB1RLI (at right behind USA flag) proudly accepts a bronze medal for his two-meter classic competition run.  He also won a gold and a bronze medal in the ARDF World Cup.  (Photo by Lee Namkyu, HL1DK)

About the Bulgarian terrain, WM5R commented, "It was not as open as the forests of Kazakhstan two years ago.  The vegetation was definitely more dense.  On the map, areas that were marked the darkest green, the 'fight' marking, were truly impassible.  You simply had to go around.  Fortunately, the trails were good."

All of our team members left Bulgaria resolving to train and practice for even better results in future championships.  "If I could have found each classic transmitter one cycle faster, that's 20 minutes and would have made a big difference," WB6CMD commented.  "It would have moved my times from 100 minutes to 80 minutes, which would have bumped me up several positions in the standings.  I'm sure that the key is to become more efficient at bearing-taking and navigation, and that requires practice."

Two pages with more photos are now in this site.  Complete results and more details of the ARDF World Championships are in the official championships site.  A full report on Team USA's participation is in the November 2016 issue of CQ Magazine.

Portions of this report have been excerpted from my Homing In column in the November 2016 issue of CQ Amateur Radio Magazine.