Participants gathered for this group photo just before the final awards ceremony on Sunday afternoon.

Around the USA, there are numerous towns and cities where you can find ARDF.  Each place has one or more "spark plug" hams who organize events and build and set transmitters.  You have read about many of them in my reports of the CQ Worldwide Foxhunting Weekend.  In north central Texas, the spark plugs are Kenneth and Jennifer Harker, WM5R and W5JEN.

Ken and Jen tried championship ARDF for the first time in 2003 and have been back almost every year since.  They have competed on Team USA at the World Championships and Ken has served as an international juror.  They organized the USA Championships near their Austin home in 2008 and must have enjoyed it, because they volunteered to host again at new locations in 2016.  And so it was that USA's national championships of Amateur Radio Direction Finding returned to the Lone Star state in April 2016.

Determining USA's best three foxtailers in each age/gender category for ARDF Team USA is one reason for our annual national ARDF Championships, which have taken place since 2001.  Another reason for this yearly get-together is to provide an ARDF "immersion" experience for newcomers to the sport and for those who want to get it started in their home towns.  It's typical for one-fourth of the attendees each year to be first-timers.

Foxes in the Texas Hill Country

Texas has some fine wooded sites for ARDF, but it's too hot in the summer months, they say.  Weather is closest to ideal in April, so that was the month they selected.  That left plenty of time afterward to organize our team prior to the World Championships in September.  Ken handled the registrations and set up a great Web site, while Jen made arrangements for three separate venues and built some new transmitters.  Spark plugs, indeed!

USA's national championships usually draw visitors from European countries such as Germany, Sweden and the UK.  That didn't happen this time because April is not a vacation month.  Nevertheless, the roster included competitors from fourteen states plus Ukraine.  Zhonghao "Charlie" Xu, an exchange student at a private high school in Wichita, Kansas, learned ARDF in his native country and came to Texas to find out what it is like in the states.  He would like to get an ARDF group started in his school.  (Wichita hams take note.) Yucheng Guo, KG5GDV, a graduate student at nearby Texas A&M University, came out to try the 80-meter classic course and did well.

Events got under way on Wednesday, April 6 with an informal practice session at Berry Springs State Park and Preserve in Georgetown, Texas.  Participants trained on an 80-meter classic course in what used to be a working orchard with over a thousand pecan trees.  W5JEN had created a new map of the site just for this session.

The first official competition was foxoring on Thursday.  It took place on a cloudy and windy day at Dana Peak Park on the north side of Stillhouse Hollow Lake in Harker Heights, Texas.  Start and finish were at the pavilion right on the shore.

In foxoring, the competitors get a map with small circles marking the approximate locations of very low power 80-meter transmitters.  They use their orienteering skills to navigate to the circles, then their 80-meter direction-finding equipment guides them to the actual transmitter somewhere within.  There are no flags at the transmitters.  Impounding of receivers prior to the start is not necessary in foxoring because the transmitters cannot be heard at the start.

ARDF at the Youth Ranch

All of the remaining events took place at the Parrie Haynes C5 Youth Ranch and Equestrian Center, which is just south of Fort Hood, near Killeen.  Before her death in 1957, Mrs. Haynes donated her 2000-acre ranch to the state of Texas to help provide for orphans.  Later it came to be managed by the Texas Juvenile Justice Department and then was leased by the Texas Parks and Wildlife Department for use as a youth camp.  Now it is operated by the C5 Youth Foundation of Texas.

The northern portion of Parrie Haynes is in constant use for horseback activities, including trail rides into Fort Hood.  The southern portion has camping areas and activities for youth.  It has ideal terrain for ARDF, but until this year, it had no orienteering maps.  With help from Nancy Bowers and other members of the Austin Orienteering Club, W5JEN spent many hours mapping and field checking the site.

The first event at Parrie Haynes was the sprint on Friday.  After getting their maps, competitors were started at two-minute intervals.  First they sought their required transmitters among the five on 3510 KHz sending slow CW.  Next, they followed a signal on 3540 KHz to the spectator corridor and punched in there.  Then it was on to locate the required foxes among the five on 3570 KHz sending faster CW and back to the finish.

After the sprints, lunch was provided by the camp staff in one of the classrooms.  Then WM5R gave a short presentation, explaining the classic events to come and cautioning participants about hazards in the woods.

It Rains in Texas!

Saturday morning dawned with a heavy overcast as everyone gathered in the equestrian portion of the Youth Ranch for the classic two-meter competition.  Transmitters were provided by the OH-KY-IN ARDF group.  They send MCW on AM, not FM, in accordance with European standards, and have a turnstile omnidirectional horizontally-polarized antenna built in.

Saturday afternoon was spent drying out and changing clothes to prepare for the traditional awards banquet, where medals were presented for foxoring, sprints and the two-meter classic.  The rain moved on overnight, leaving cloudy skies and pleasant temperatures as everyone went back to the southern portion of the ranch for the classic 80-meter competition on Sunday morning.  After lunch, 80-meter medals were awarded and everyone headed for home.

Organizing Co-chair Kenneth Harker, WM5R (at right) is smiling because the last course has been set and the last medals will be awarded soon.  He's at the 80-meter classic starting line with the final starting group, consisting of Dick Arnett WB4SUV (M70), Yucheng Guo KG5GDV (M21) and Jerry Boyd WB8WFK (M50).  Click for more photos.

Ken and Jen deserve thanks for working very hard to make it a successful week.  They had enthusiastic support from Nancy Bowers of Austin Orienteering Club.  Members of the OH-KY-IN Amateur Radio Club provided transmitters for the two-meter event.  David Gent, W5QZ of College Station, Texas was in charge of the starts for every competition day.  April Moell WA6OPS and Joyce Gent N8WXK provided first aid services.

Click for five pages of photos in this site.  Complete results are in the Texas ARDF Web site.  Background information, including lodging, transportation, frequencies and climate are in the event section of that site.

Portions of this report have been excerpted from my Homing In column in the August 2016 issue of CQ Amateur Radio magazine. 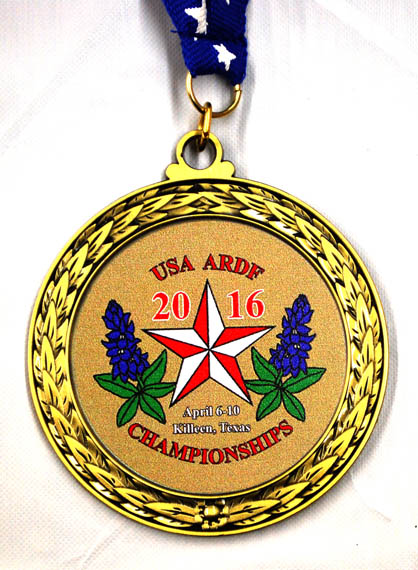 Go to First photo page of this event