(In reverse order by date) 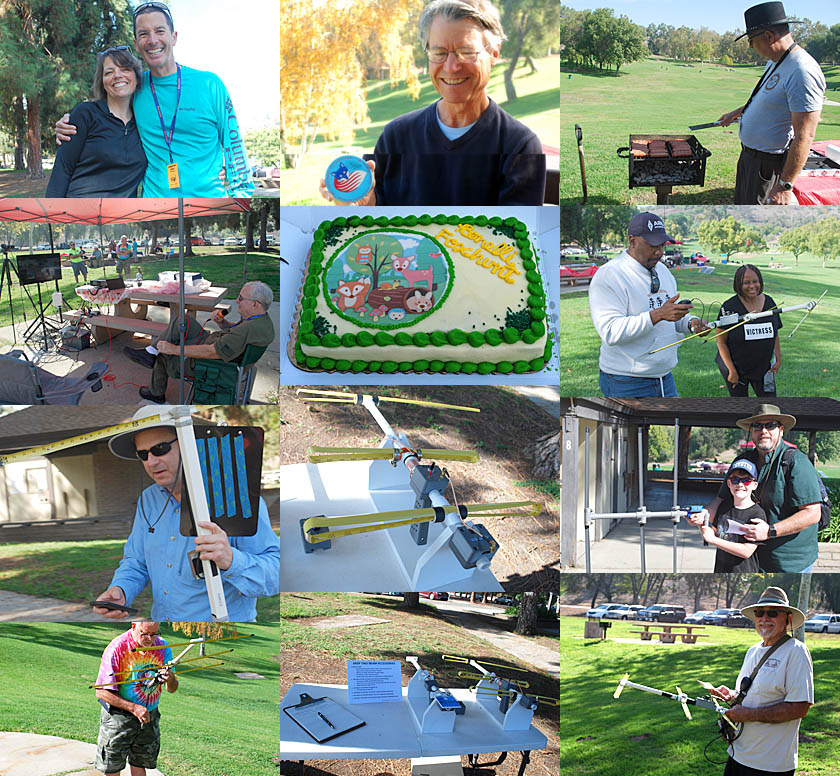 Late October is always a great time for hidden transmitter hunting in Bonelli Regional Park.  Twenty-two people put their names on the sign-in sheet and participated in various ways.  We were all set for the antenna building session when the call came from Marvin Johnston KE6HTS, telling us that he had come down with food poisoning and would not be able to make the trip from Santa Barbara.  But there was enough loaner equipment that the newcomers could try finding the three two-meter practice transmitters anyway.

Attending from Winchester, California, which is near Sun City, was Bill Wright WB6CMD.  He was just back from the USA ARDF Championships in North Carolina, where he competed in all four events and won three gold medals and one silver medal.  Well, not medals actually.  This year's awards were large coasters with the event logo on them.

Scott Moore KF6IKO from Santa Barbara set an excellent five-transmitter two-meter ARDF course.  I wish more attendees had given it a try.  Here are the results:

Two additional participants found the beginner transmitters but couldn't get to any of the ARDF course transmitters.  Please come back next time and we'll find someone to give you some one-on-one help!

At a special table in the shade was Larry McDavid W6FUB of Anaheim, demonstrating his 3D-printed handles and radio holders that attach to measuring-tape beams.  The handle makes holding the antenna much easier and less tiring, because the handle can be at the exact balance point.  No more holding the antenna by the end of the boom and having it pull your wrist down or grabbing it in the middle with your hand inside the beam pattern.  Larry also designed boxes to hold K0OV or KC9ON attenuator boards, and for attaching a radio or scanner to make a one-piece assembly for holding in one hand.  Larry does not sell these parts, but he will make the 3D print files available to anyone who wants to print the parts themselves.

Special thanks to the GOTAhams and the Tri-County Amateur Radio Association for a good turnout and for providing a barbecue lunch, complete with a festive carrot cake.  Thanks to everyone who came out and made it a pleasant day. 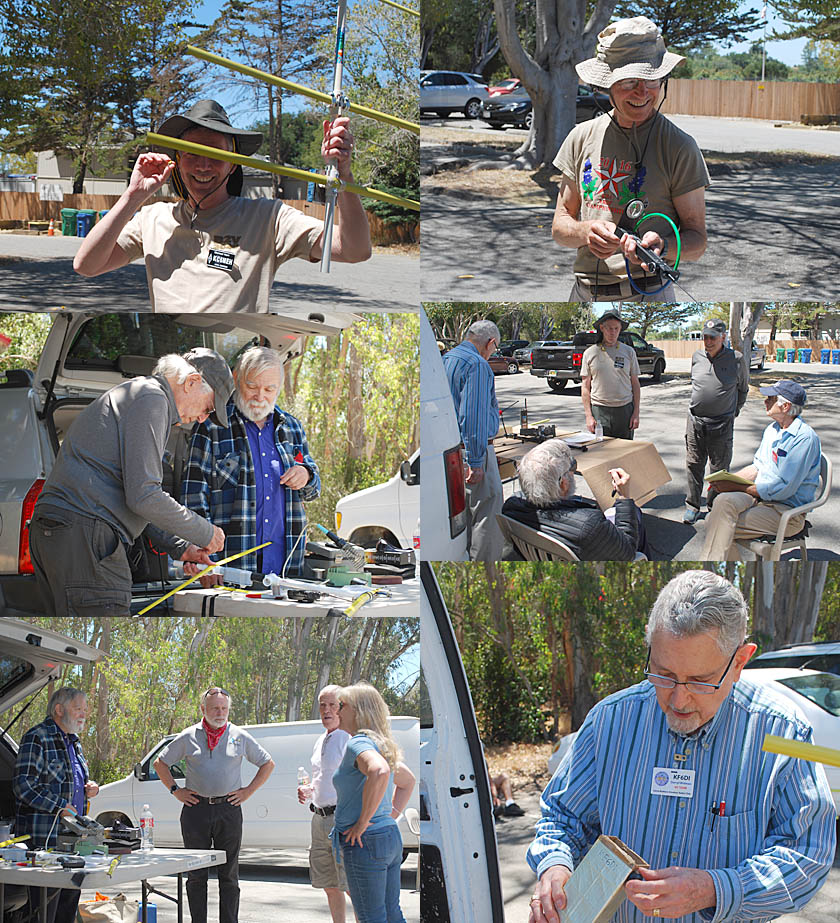 It started out as a great day for hidden transmitter hunting in Goleta.  Then there was a minor setback when Marvin Johnston KE6HTS had a fall just after putting out the third of the five two-meter ARDF transmitters.  He's OK, but the other two transmitters didn't get set, so it was a three-transmitter course on two meters.  Here are the results:

Two participants went out to find the 80-meter transmitter that I put in the northeast part of the park.  Here are those results:

It was good to see long-time transmitter hunter and hider Darryl Widman KF6DI visiting.  Others on the sign-in sheet were Bob and Cindy Sherman KJ7QWQ and and KJ7QWT, visiting from Grant's Pass, Oregon, as well as Al Lever KD9KMZ and Les Merryman KN6CKG.  Some learned about ARDF by finding my talking practice transmitters.  Afterward, several of us went to Creekside restaurant for a good late lunch.  Thanks to everyone who came out and made it a pleasant day. 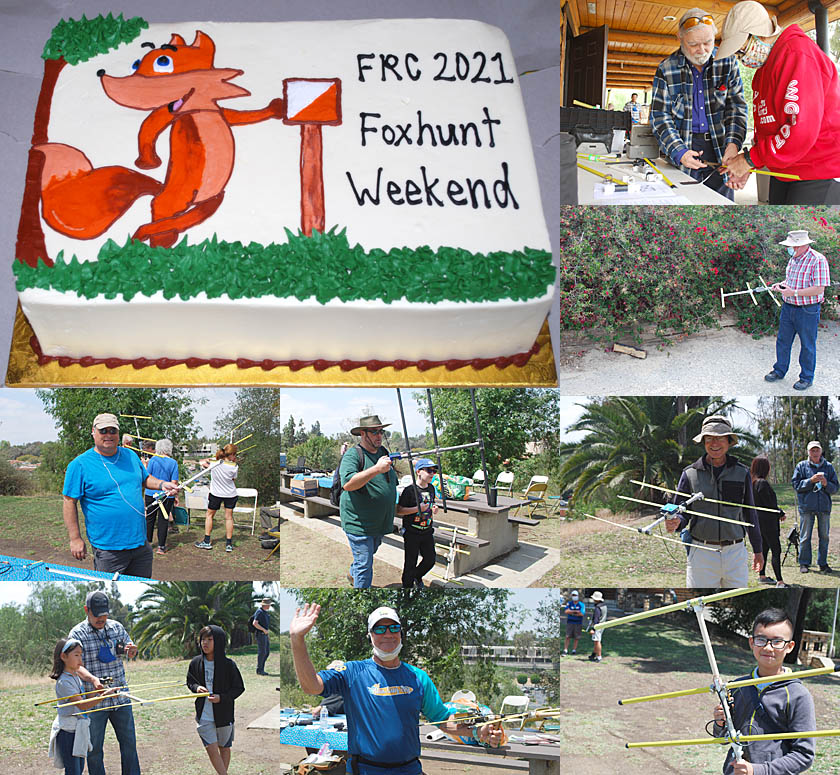 After 18 months, it was great to have an ARDF session in southern California.  Weather was perfect, snacks were good and everyone was in good spirits.  There was a good turnout from members of the Fullerton Radio club and the GOTAhams club.

In addition to seeing old ARDF friends again, it was great to have some newcomers join in the fun.  I put out three talking two-meter practice transmitters near out gathering spot at the Izaac Walton Cabin.  Several newcomers tested their antennas and techniques by finding these transmitters, including members of the Kim family (Leo KN0LEO, Audrey KN0AUD and Justus KN6NOS).  Kathi Mixon KD6CAF built an antenna kit and shared it with hubby Ken KC6WOK.  Also seeking the practice transmitters were Tom Smith KB6A and Justin Nguyen K6OOF.

The five-transmitter two-meter ARDF course took those who successfully tried it to all of the corners and led them up and down the many hills.  Here are the official results:

Bill Wright WB6CD, who has competed at the ARDF World Championships, set the pace by sprinting to all of five transmitters and back in just 35 minutes.  He was also the only one to go out to track my 80-meter transmitter at the far north end of the park.  He found this 80-meter fox and returned in just 10:23.

Making this ARDF session possible were Gene Thorpe KB6CMO and Bob Houghton AD6QF of the Fullerton Radio Club.  They made arrangements with the city and brought water and snacks.  Marvin Johnston KE6HTS came from Santa Barbara to put on the antenna-building clinic.  And as always, April Moell WA6OPS brought the traditional Foxhunting Weekend cake.  Thanks to them and to everyone who came out to have fun finding fox transmitters.

Go to Local ARDF Contacts -- Links to hams and groups that are doing international-style foxhunting in North America and around the world.