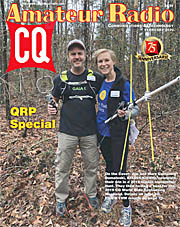 A ham radio magazine is once again urging amateur radio clubs and ham operators across America to go "foxhunting."  But the bushy-tailed animals have nothing to fear.  Hams, after all, are not hounds, and in ham radio lingo, a "foxhunt" is one of several names for radio direction finding, a competition to locate a hidden radio transmitter.

CQ Amateur Radio Magazine has designated May 8-9, 2021 as the "CQ Worldwide Foxhunting Weekend" (CQ WW FW), and is encouraging ham operators and radio clubs to conduct hidden transmitter hunts at that time.

"It's not a QSO contest and there are no set rules," writes radio foxhunting veteran Joe Moell KØOV.  "It's just a time for clubs, schools and Scout groups to try this exciting radiosport."  Moell notes that participation is not limited to licensed hams.  "There's no license requirement to receive, so everyone can participate.  If there is a conflict on that weekend, any time in the spring will do.  We're not picky!"

On-air competition is a ham radio tradition dating back nearly to the birth of the hobby and foxhunting has been part of that tradition for at least 60 years.  Foxhunting may be done by car or on foot, and the magazine is encouraging ham groups to use either one or both during the CQ WW FW.  And there's more than a fun day of friendly competition involved.

"Foxhunting is certainly fun and a competitive challenge," says CQ's  Editor Rich Moseson W2VU, "but it also teaches important radio direction-finding (RDF) skills that may be called upon in searching for a lost hiker or downed airplane's Emergency Locator Transmitter.  RDF techniques are also useful for tracking down sources of electronic interference."

"Transmitter hunting belongs in the mainstream of Amateur Radio," adds Moell.  "Ham RDF can be used for public service and to save lives."

This year's Foxhuning Weekend may be different due to the COVID-19 pandemic.  Some parks may be closed and gatherings of more than a few people may be prohibited by "safer at home" regulations.  However, in-vehicle hidden transmitter hunts are permitted in many places and are being enjoyed by numerous local ham radio groups around the USA, following appropriate social distancing and other precautions.  Other groups are having "hunt by yourself when you can" transmitter hunts with unattended transmitters.  Please follow all local, county and state regulations in your area as you plan your Foxhunting Weekend activities.

The CQ Worldwide Foxhunting Weekend supports efforts by ham radio groups all over the world to promote the sport.  "The USA Championships of on-foot transmitter hunting take place annually," says Moell, who served as ARDF Coordinator for the USA from February 1998 through June 2019.  "Competitors from all over the USA plus visitors from other countries attend.  Many clubs use Foxhunting Weekend as an opportunity to train for and promote such championships."

CQ Amateur Radio  is a monthly magazine in print and digital form published by CQ Communications, Incorporated, which also publishes CQ Books and the CQ Video Library.  CQ Communications is based in Hicksville, New York.

This is the 24th year that CQ Communications has sponsored a foxhunting weekend.  Formerly dubbed the "National Foxhunting Weekend," the name was changed in 2007 to recognize the worldwide interest and participation in this sport.  Some stories and photos of the 2020 Foxhunting Weekend are in the August 2020 issue of CQ. 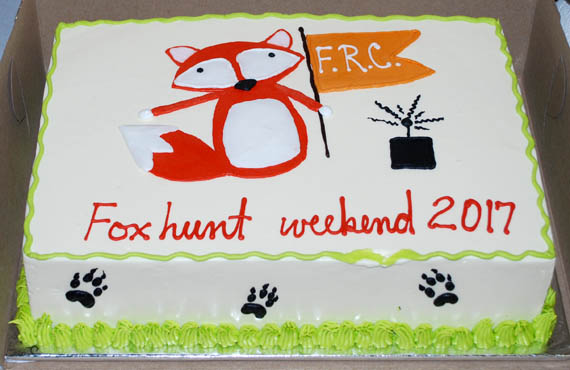 Having refreshments at the end of the hunt is always a good idea.  This special cake was waiting for finishing foxhunters at a Foxhunting Weekend ARDF hunt in Hillcrest Park, Fullerton, California.

Back to KØOV's Homing In home page