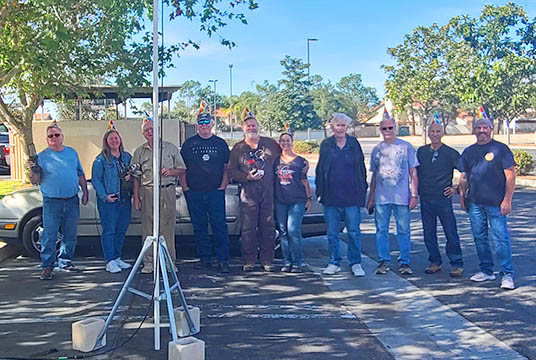 This semi-annual 6-Meter T-hunt began at 9:00 AM and ended at noon.  Dana Dulabone N7UFT hid the transmitter at 24440 Alessandro Boulevard in Moreno Valley.  It sent a CW message for two minutes, then was off for two minutes, and so forth.  Power output was two watts into a GP-15 antenna mounted eight feet above ground.

Ten hunters participated with these results:

All of the hunters found the T within the four hour time limit.  John Carroll W7RSO had the best time and mileage, taking first place.  He will be the hider next time.  The four-person Team Will had second-place mileage.

As a bonus, each hunter was challenged to copy the CW message.  Robert Canillas AD6XJ successfully decoded the message and even found a misspelled word!

After the hunt was over, everyone celebrated the 77th birthday of Will Anderson AA6DD with party hats and birthday cupcakes.  Then the group went to an excellent restaurant, Sonora Grill, where everyone talked about the hunt and just had a great time.

Everyone who participated said how much they had learned and what a good time they had.  All are looking forward to the next hunt.

Excerpt from the Homing In Column by Joe Moell KØOV, October 2016

For competitive mobile transmitter hunts on ten meters and six meters, single-turn loops are the most popular antenna choice.  The loop is connected to a suitable portable or mobile receiver through an RF attenuator to reduce the signal for closing in when the S-meter stays at full scale.

The unwanted "antenna effect," where the loop wire picks up the electrical component of the wave as well as the magnetic component, is much more prevalent on 10m and 6m than on 80m.  Good loop designs avoid this source of bearing errors by carefully balancing the loop windings around ground or by electrically shielding the loop.  More information, plus three designs for 10m loops, can be found in Chapter 17 of THRDFS.

Twice each year (April and November), a well-attended six-meter FM mobile transmitter hunt takes place in Riverside County, California.  The transmitter is within a 15-mile radius of the starting point.  Hunters try to get to the fox with the shortest odometer mileage.  These hunts are organized by long-time 6m enthusiast Will Anderson AA6DD, who has published several designs for 6m RDF loops in his Web site.

Most participants use one of Will's loop designs, but some have sought more weak-signal performance than a loop can provide.  I hunt with my 6m shrunken quad (plans in my Homing In column in CQ-VHF Magazine, Fall 2013 issue).  Robert Haggard AD6XJ uses his one-of-a-kind 6m Doppler installation.  Most of the time, we get to the transmitter more directly than the hunters using loops. 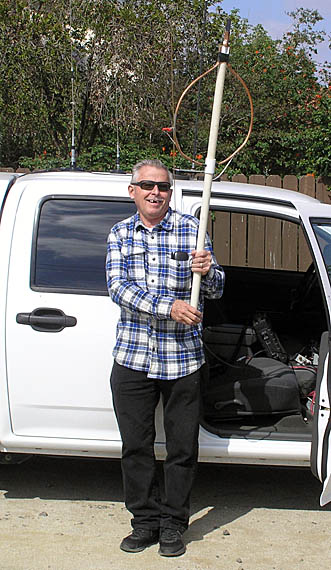 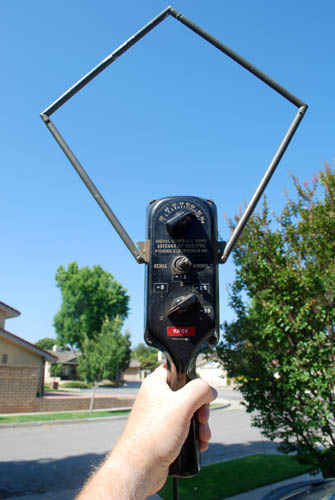 A military surplus loop antenna like this one with a built-in attenuator makes a very simple and inexpensive RDF system for six-meter transmitter hunts. 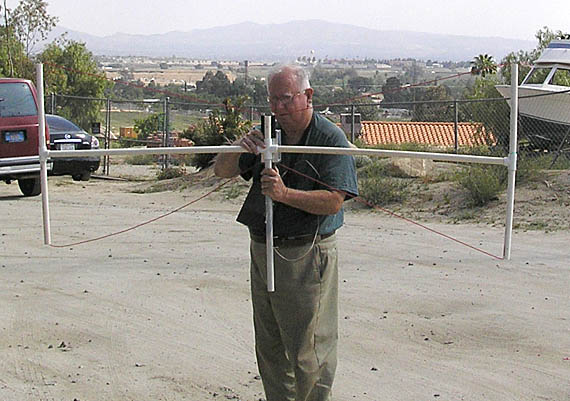 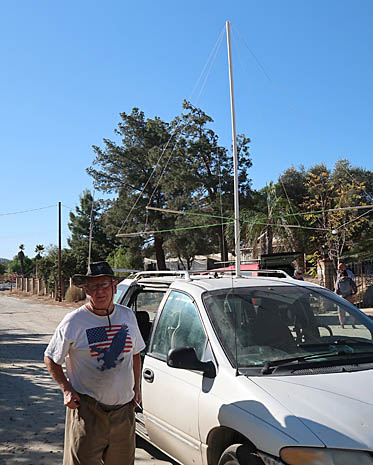 Will is always experimenting with antennas for communications and RDF.  This is a mobile delta quad for six meters. 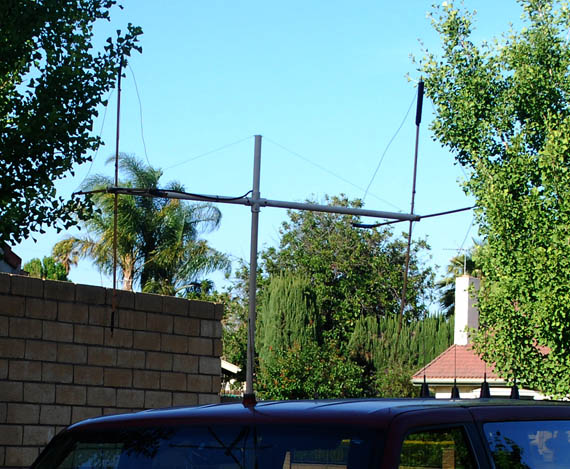 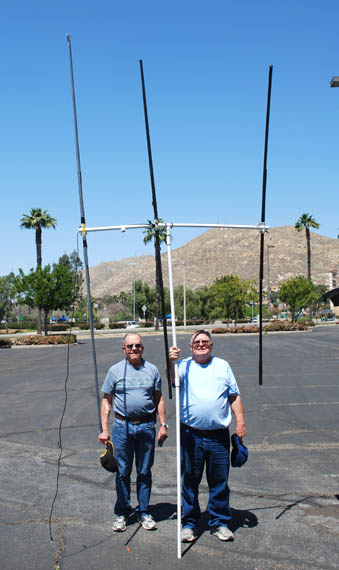 Ron Hurwit and Gary Gonnella W6RYO use this big tape-measure yagi to get their starting bearings. 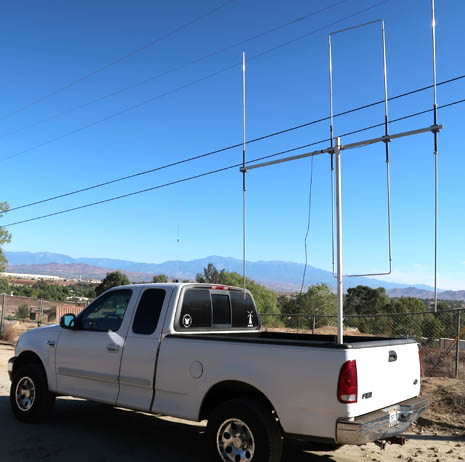 Occasionally a hunting team will use a full-size six-meter mobile beam. 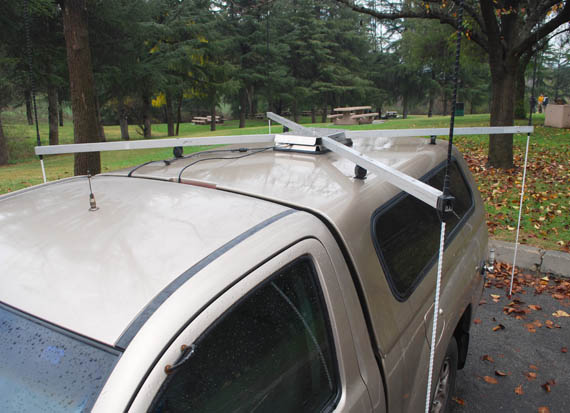 An optimum four-whip Doppler RDF antenna has the elements in a square pattern of about a quarter wavelength on a side.  Robert Haggard AD6XJ has used this Doppler array for six-meter mobile T-hunting.  Instead of the usual monopoles, which would have required a continuous ground plane for good directional performance, Robert used vertical dipoles made from helically-wound whips. 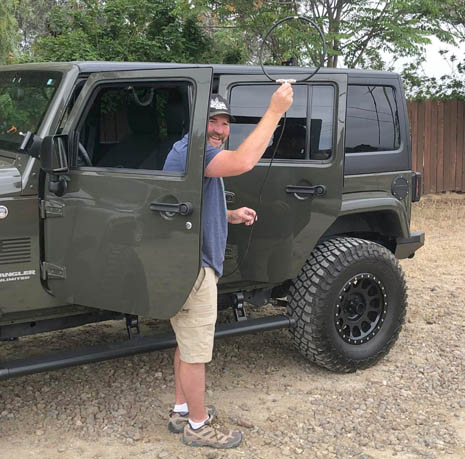 John Salisbury W7RSO got bearings on this hunt with a 6-meter shielded loop.  (Photo by AD6XJ)

This was the first 6-meter hunt since 2019, due to COVID.  Hiding were Steve Baer AI6IE and Mark Carey AG6ZR.  Hunt scoring was based only on mileage, but hunters had to find the transmitter by noon.

Wil Anderson AA6DD was the first to find Steve and Mark but he came in second because his miles driven was 10.6. That was 1.5 miles farther than first place winner John Carroll AA6RF, who found them in only 9.1 miles.  It was 8.7 miles as the crow flies from start to finish.

Third place went to the team of Gary Gonnella W6RYO and John Hurst KU6X at 17 miles. Jenna and Robert Canillas, WW0MAN and AD6XJ, found it in only 16 but they arrived a few minutes after noon so that didn't count. John Salisbury W7RSO arrived last and reported 30 or so miles driven.

Afterward, everyone enjoyed a bring-your-own-lunch together at the hiding place, which was Frank Eaton Memorial Park in Perris. 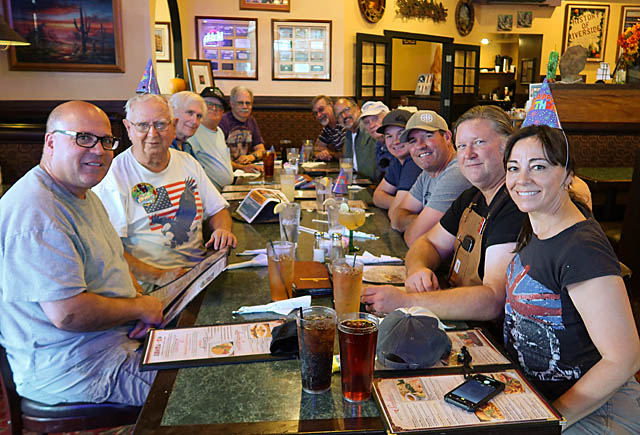 It was a big group at the Cactus Cantina after the hunt as Will Anderson AA6DD celebrated his birthday.

Pleasant weather and some advertising made for a good turnout for this hunt.  John Carroll N6RQW hid just 4.3 air miles from the starting point.  His ten-watt transmitter and Ringo Ranger were in the northwest corner of the Mission Grove Shopping Center at Alessandro Boulevard and Trautwein Road in Riverside.  First to arrive was John Salisbury KM6YLK and his son.  All teams were got there by 11 AM, time for lunch at the Cactus Cantina.

Lowest start-to-finish mileage wins this hunt.  Here are the mileages: 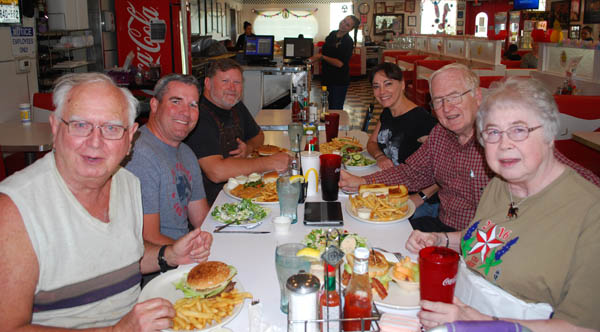 April and I chose the north side of Perris for the April 13 six-meter hunt.  We were northeast of the intersection of Perris Boulevard and Nuevo Road with a 45-watt signal.  The correct bearing from the start to our location was 140 degrees true and the crow-flies distance was 6.5 miles.

Will Anderson AA6DD and his new helper John Salisbury KM6YLK started with a very weak signal, but they got good enough bearings that their route could only have been shorter if they had taken the freeway.  Robert AD6XJ and Jenna Canillas WWØMAN got an initial bearing toward the east, so they spent some time near Val Verde and the Perris Reservoir before heading south to our location.  Then we all walked over to Jenny's Family Restaurant for a leisurely lunch.

Lowest start-to-finish mileage wins this hunt.  Here are the mileages: 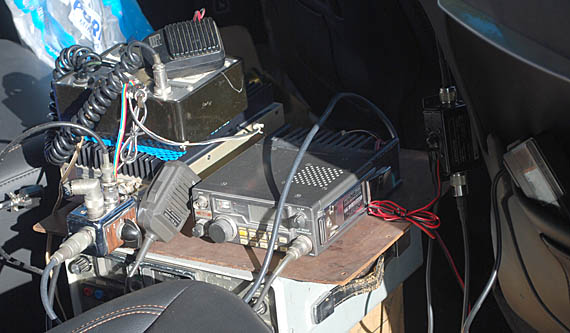 KØOV's hiding setup included two six-meter transceivers, a "brick" amplifier, power meter and tone box.  Not shown are the Ringo antenna and two marine storage batteries (one for the radios and one for the amplifier). 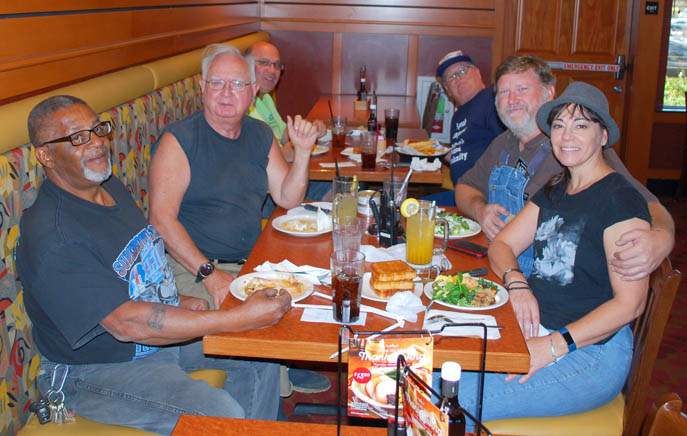 Glen Byron KD6ONU had a last-minute conflict that prevented him from hiding the transmitter as planned, so Will Anderson AA6DD took off at 9:15 AM to find a hiding place. He was soon on the air with a very weak signal at the starting point, even though he said that he was running 70 watts into his mobile whip.

The signal came up rapidly as the transmitter was approached.  Will was just south of the 60 freeway in the shopping center parking lot just southeast of the Perris Boulevard interchange.  First to arrive were Joe Moell KØOV and WB2LRH with the shrunken quad spinning above the van roof.  Next were Robert AD6XJ and Jenna Canillas WWØMAN with Robert driving and Jenna getting bearings with a surplus military loop and portable receiver.  Not long afterward, the team of Gary Gonnella W6RYO and Curt Wilson WB6KQA arrived, hunting with a loop antenna and SDR receiver dongle.

This hunt is scored by mileage, with the lowest mileage winning.  Here are the mileages:

Getting a bearing from a high spot with a surplus military loop is Jenna Canillas WWØMAN.  (Photo by AD6XJ)

Under a cloudless sky, April WA6OPS and I set up our 50.3 MHz hidden transmitter in a parking lot near the Moreno Valley Mall.  Four teams set out from the QTH of AA6DD at about 9:40 AM. The direct route from there, around March Air Force Base, then to our location was only a little over ten miles.  Nevertheless, it took until almost noon for us to be found, because we were somewhat shielded behind a movie theater and had a clear shot to Box Springs mountain, which provided some interesting signal reflections.  The general agreement among the starting hunters was that we were northwest, but the correct bearing to us from the start was actually about 25 degrees true.  So everyone spent some time in the Riverside area before going east of the 215 freeway to get to us.

Surprised that they were first in was the team of Gary Gonnella W6RYO and Ron Hurwit.  Next was Glen Byron KD6ONU, followed by Will Anderson AA6DD with Mark Carey AG6ZR.  By that time, Robert Canillas AD6XJ was ready to have lunch with the group, so we told him where we were and then everyone had a fine barbecue meal at Hoggs Gourmet Grill.

This hunt is scored by mileage, with the lowest mileage winning.  Here are the mileages:

Weather was beautiful for the fall six-meter transmitter hunt on November 11, 2017.  Robert Haggard AD6XJ and Jenna Canillas KBØZDR were the hiders on 50.3 MHz FM, reading from an old QST magazine and trying to keep the transmitter from overheating.  Four vehicles left the starting point about 9:50 AM with bearings that were generally north.

First to arrive was the team of Ken Bourne W6HK and Roger Kepner W6SQQ on their first southern California six-meter hunt.  The loop led them to overshoot Robert and Jenna's location in east Riverside, but they turned around in Colton and came back.  Next to get to the hiding spot behind the Habenero Mexican Grill on University Drive was Will Anderson AA6DD, followed soon after by the team of Joe Moell KØOV and Tom Gaccione WB2LRH.  They had gotten into the area some time earlier, but wild bearings led them to thoroughly check out the area near the railroad overpasses to the west before backtracking to the restaurant.  A few minutes later, Glen Byron KD6ONU was ready to be talked in, so Robert gave him the restaurant location.  Everyone then enjoyed a fine Mexican lunch.

Here are the mileages:

Bearings of the KØOV/WB2LRH team on the SigTrax App as they closed in.  The red square is the hidden transmitter location.  Note that two bearings are close and the other two are "wild."